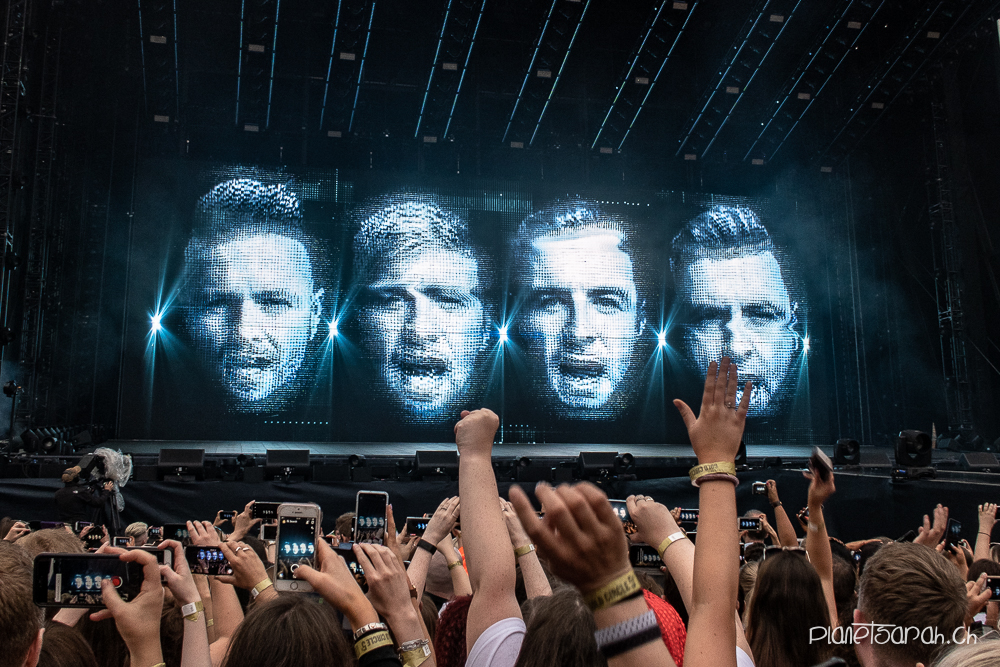 The excitement made the heart beat faster and faster as the intro started. Band facts flickered across the oversized screens. Goosebumps spread over arms and a shiver ran through the whole body. The loud cheers and screams almost burst the ear canals. 80,000 people from all over the world came to Dublin to celebrate the return of their favorite boy band.

* Hello, my love, I’ve been searching for someone like you, for most my life happiness ain’t a thing I’m used to*

The screen opened in the middle when Westlife appeared halfway up and started their new comeback song “Hello my love” written by Ed Sheeran. Brightly colored confetti fountains shot into the air! From a distance they looked like “Holy festival colors”. 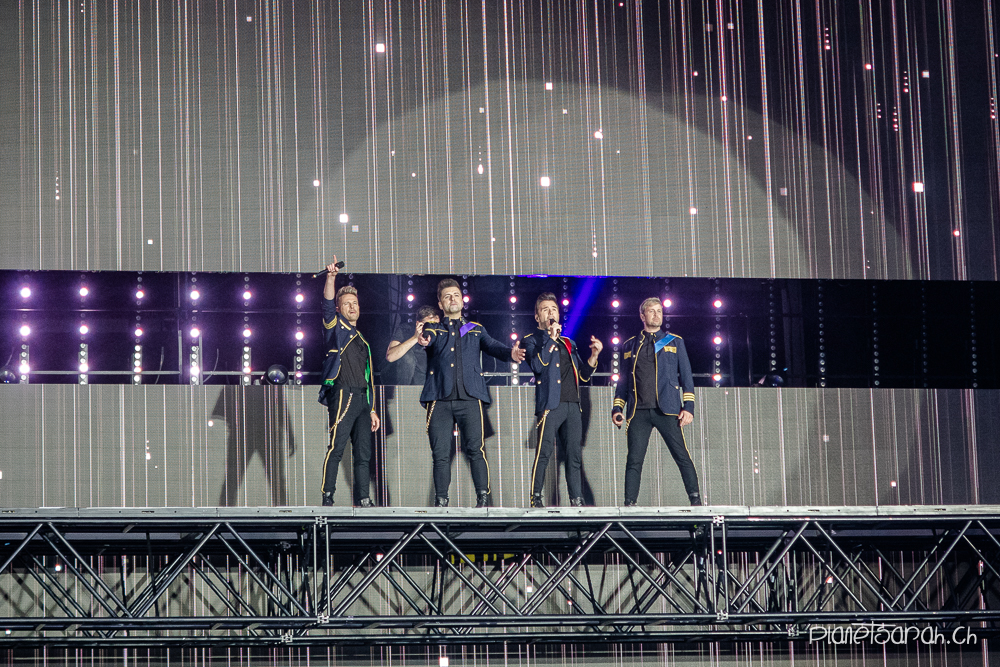 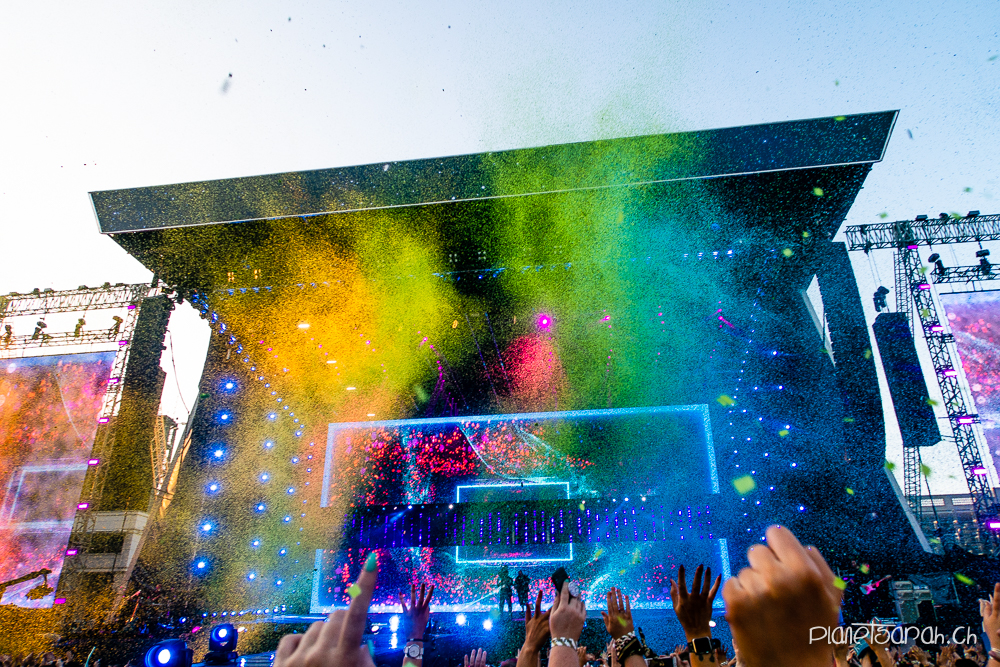 What a perfect song to start the comeback show.

Almost exactly 7 years ago we stood here at Croke Park for the last time and said goodbye to Westlife. The most successful UK arena act ever separated after 14 successful years. Westlife was convinced that they would never come back, Kian said about their split. At the time, however, many fans were sure that Westlife would return after a few years. So rumors of a comeback had been around a few weeks before the announcement of the “Twenty Tour”, that ended with 2 sold-out Croke Park shows before their Asian tour. It confirmed our belief from back then! But to really see your favorite boy band on stage again after 7 years is definitely something else. The best thing about it: It didn’t feel like 7 years, but as if they had never been gone. 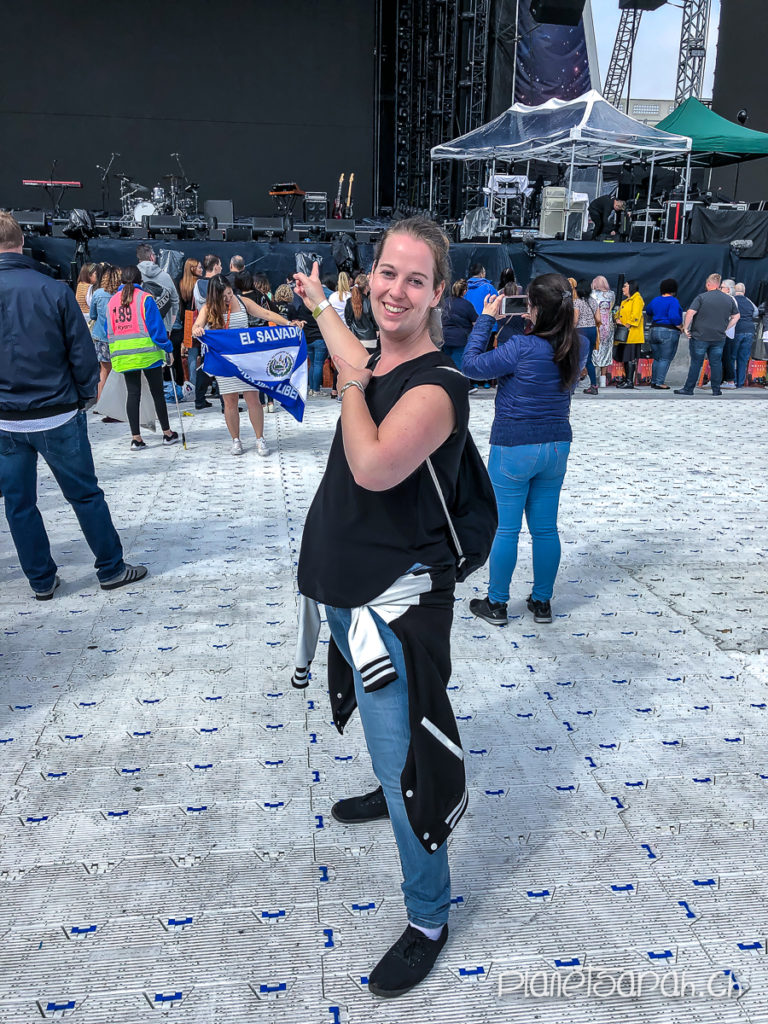 Westlife were cast in 1998 by Louis Walsh and Simon Cowell to the five-member boy band. The three Sligo members Shane Filan, Mark Feehily and Kian Egan knew each other as children. Nicky Byrne and Brian McFadden from the Irish capital, Dublin, joined the trio. The band started with their first hit “Swear it again”. Brian left the band in 2004, however, started a solo career and, as expected, is not part of the comeback.

Shane, Mark, Nicky and Kian all tried solo projects in these seven years. Musically, Shane was the only one really successful. Nicky built a solid radio host career, while Kian mostly made headlines as the jungle king on “I’m a celebrity, get me out of here”. Around Mark it was mostly quiet.

Yes, yes, yes! I was leaping in the air for joy when Westlife announced Wild Youth as their first opening act. I got to know them last October as a Kodaline support in Zurich. They are definitely Ireland’s Next Best Thing! And how they are!

The five-member band started their set with their new single “Long time no see” released this Friday. The Irish rocked the pre-program with old and new songs like “Last Goodbye”, from the same named ep, and let Croke Park dance to “Making Me Dance” and “Can’t Move”. Frontman David in particular whirled wildly around on stage and cheered the audience on. Wild drum solos played by Cullum with the support of keybord player Conor. Letting the audience sing along wasn’t just fun for the band. Rocky, funky, a little crazy: both their sets were  definitely over way too quick on both evenings.

“Ready or not” – it continued with British musician James Arthur. The X Factor winner, accompanied by his band, won Croke Park in no time with tons of hits like “Impossible”, “Falling Like A Star” or The Greatest Showman soundtrack “Rewrite The Stars”. Seen him last summer at Stars Of Sounds in Aarberg for the first time, we were definitely on a higher level here. With his mix of rock, pop, rhythm & blues, soul and rap James Arthur knew how to thrill and literally everyone was able to sing along every song word by word. So at the end of his 45min set überhit “Say You Won’t Let Go” was a must. 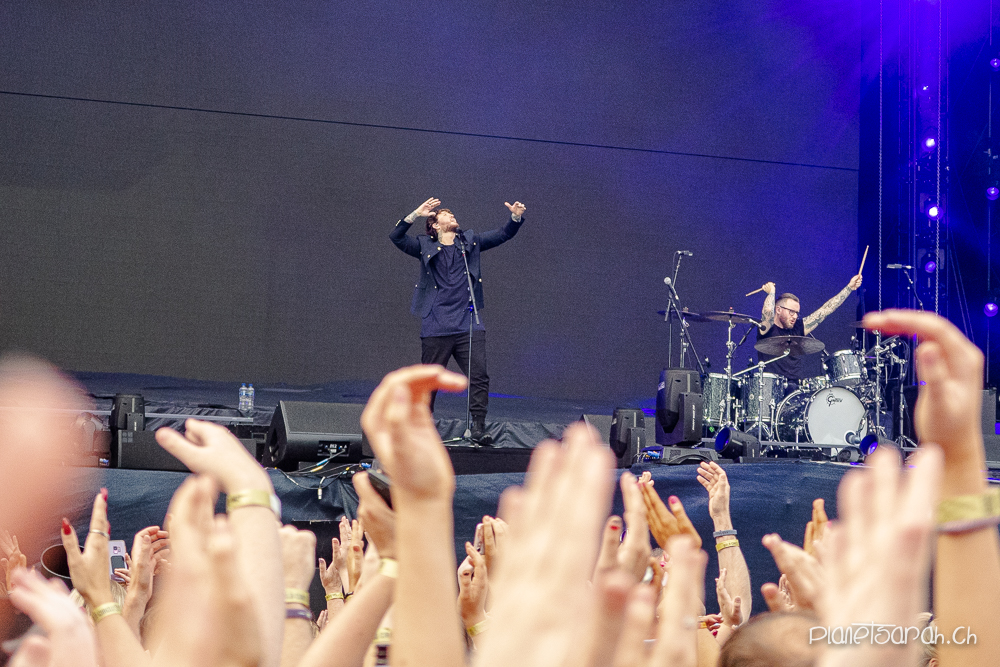 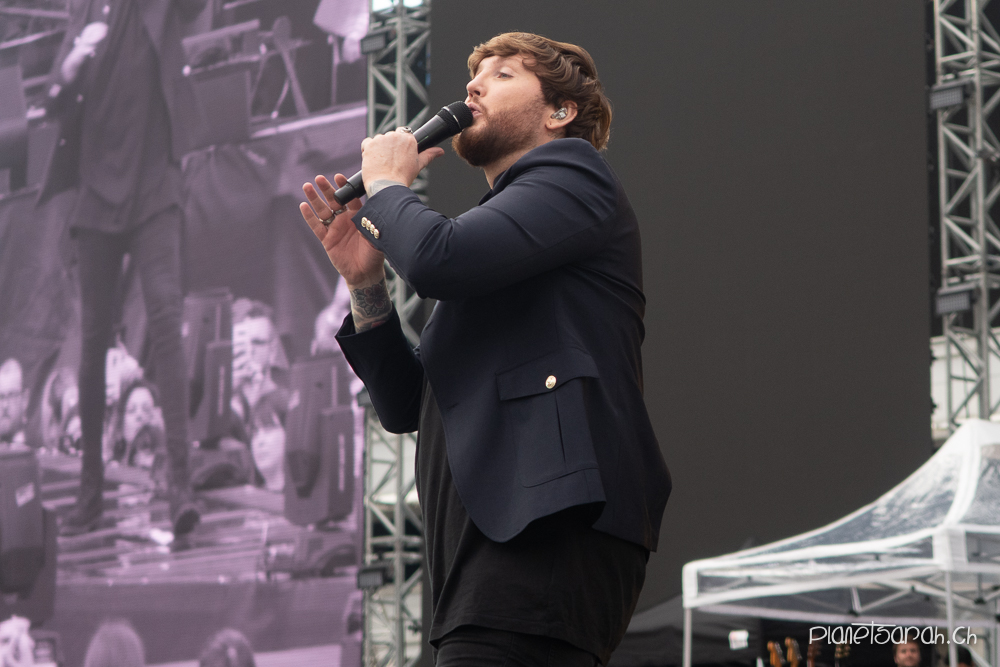 After over 30 shows on the Twenty Tour (can you actually celebrate 20 years if you were 7 years separated? Just a question …) Westlife returned home to Croke Park. For the 6th time they played at the sold out Dublin Stadium. They celebrated their return in front of 80,000 fans each night. The second evening was even shown live at selected cinemas worldwide. Exciting!

The boy group, or rather man group, stood at the edge of the stage and continued with their first hit “Swear it again”:¨

They definitively still get the love of their fans. You could hear that from the frenetic cheering and screaming and you could see it in all the lights, smiling faces and expressions of love on countless homemade banners. Everyone knew line by line, sang loudly word for word. Whether in “What About You” or “My love”, even after 7 years everyone still knew exactly when and where their hands should be raised and swayed, or when and in what rhythm to clap. “Croke Park! How are you feeling? ” Mark asked – it was overwhelming to see him, Kian, Shane and Nicky standing on this stage again. 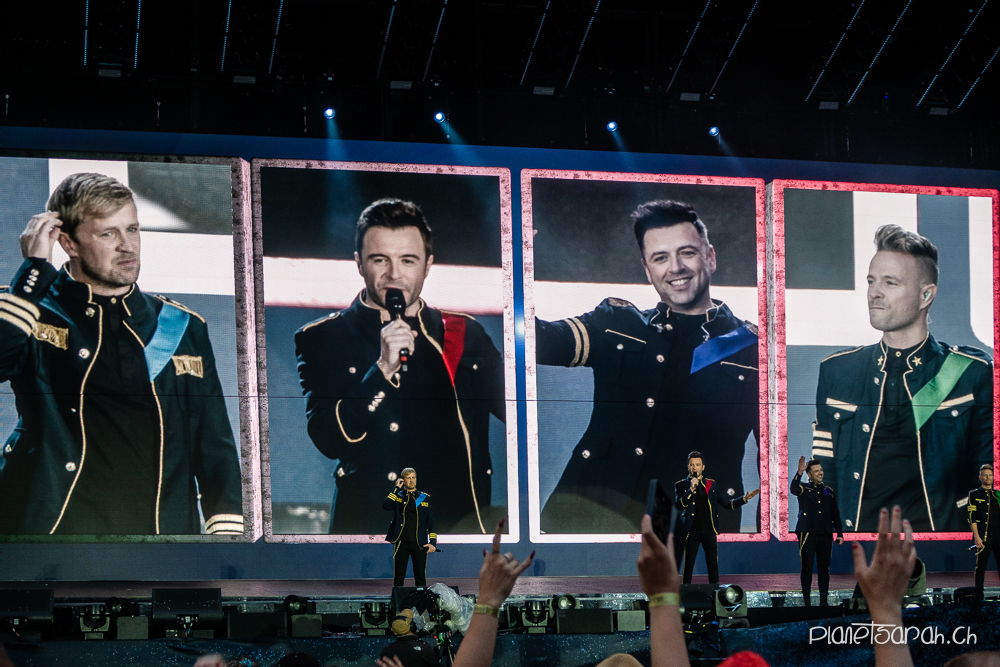 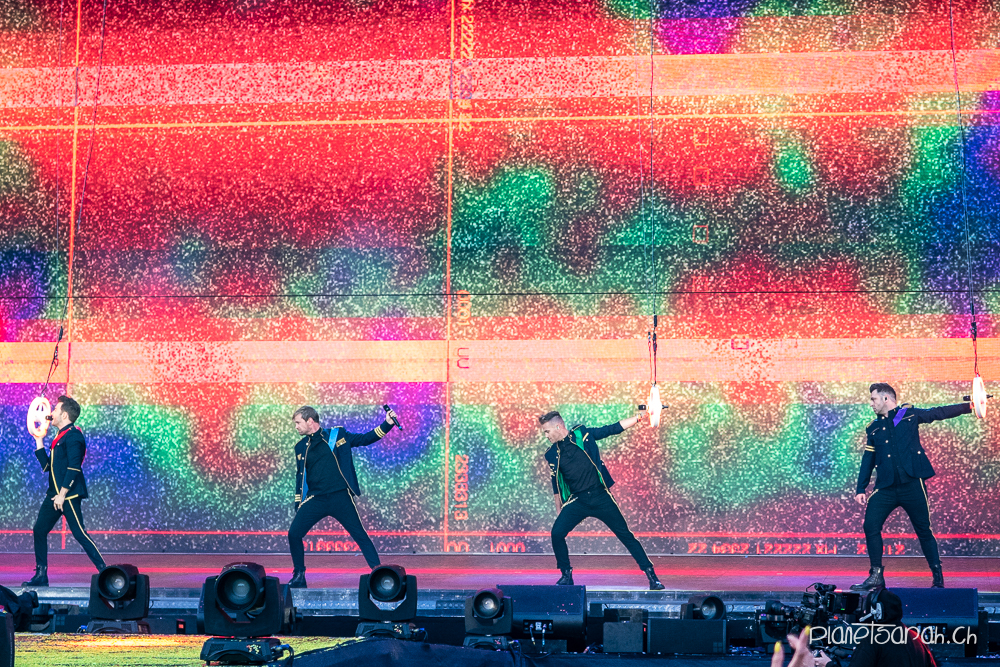 Glowing red microphone wheels fell from the ceiling and Westlife rocked in the heat of the pyro to “When You’re Looking Like That”. My all-time favorite! On the second evening, however, Kian’s microphone got stuck up there and he had to improvise a little.

After the last tune, Westlife disappeared into a brief pause behind the stage, while an animated James Bond-like clip was shown – in the leading roles, of course, the four Westlife members. The short film went straight into the Billy Joel cover “Uptown Girl”. Cool red-black outfits and sexy dance moves made the set and encouraged the audience to dance along. It was raining even more confetti.

The biggest birthday party ever

The screen turned red at the end of the song and Westlife merged into the romantic Barry Manilow cover “Mandy”. After a short speech from Mark, a surprise was waiting for Shane on the first evening. As on July 5, 2019, he celebrated his 40th birthday and probably the biggest party you could have. The 9 Westlife children suddenly stood on stage and serenaded the triple father with a birthday cake and a birthday song. Of course, a souvenir photo shouldn’t be missing either. And with Shane’s teenage daughter ahead of them all, it was made clear how many years had passed. 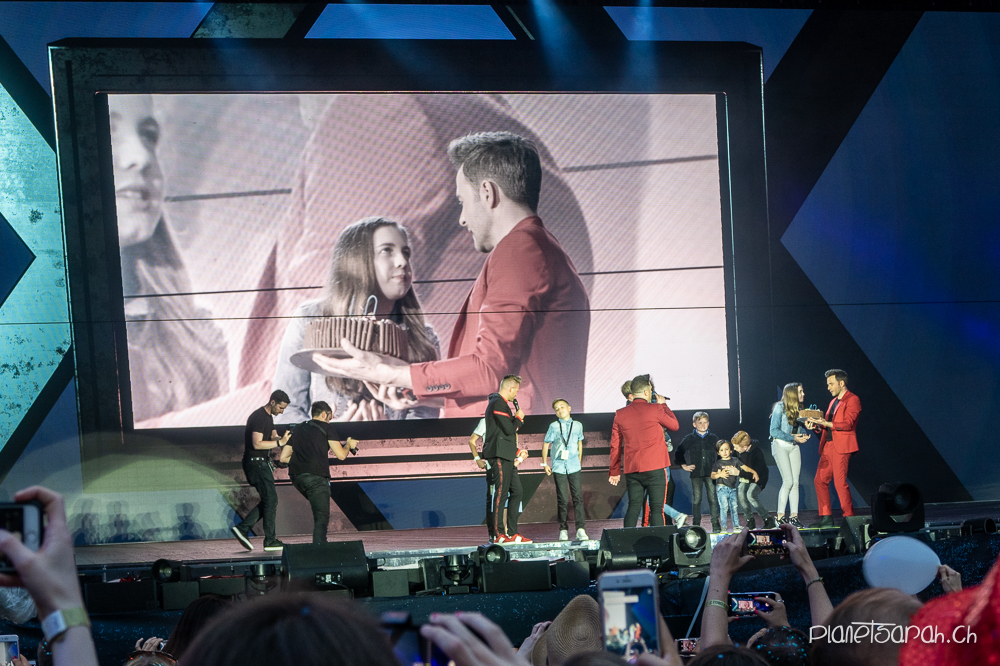 Also with “If I Let You Go”, the set remained calmer. However, Westlife finally came along the runway to show themselves on the B-stage to the back of the audience. Images of the official video were shown on the screen and the fans’ hearts melted away. Especially during the following “Home”. “Dublin, we are home!” – how we had missed the four guys over the years. Also nice to hear Nicky and Kian again in their solo parts, even if they are not the best singers. The variety is what makes it different!

With Nicky’s speech, some had already believed that the rumor going around before the show would actually be true: But it did not appear superstar Ed Sheeran on the Croke Park stage, who had co-written some of the new Westlife songs. It was their long-time companion and hit guarantor producer Steve Mac. He supported Westlife during the new song “Better Man” by accompanying them on the piano. The new album “Spectrum” will be released on November 15, 2019. 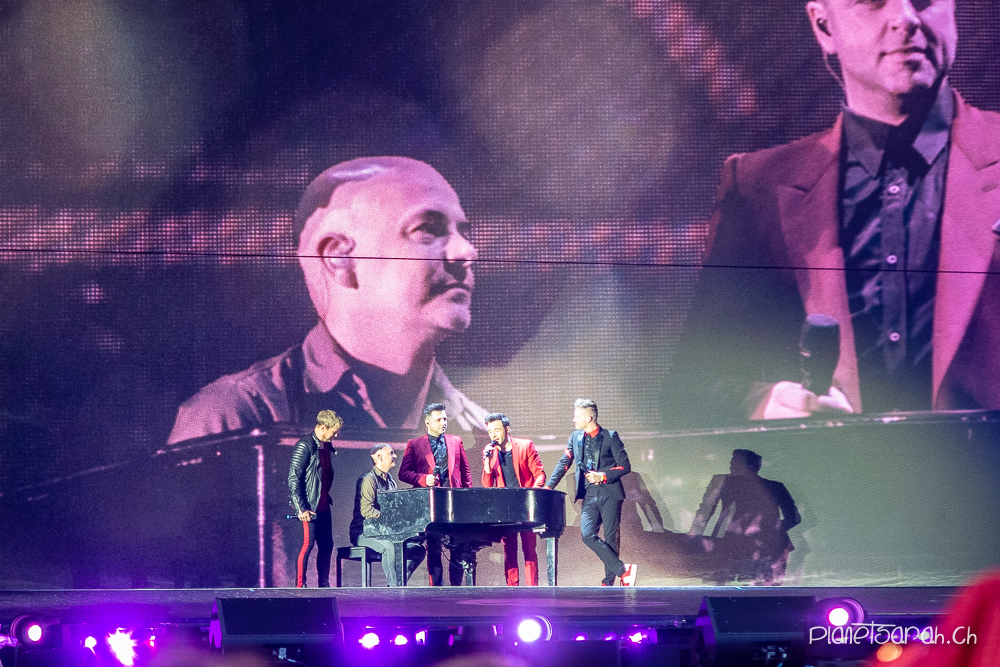 The next change was not long in coming: While we were still waiting for Westlife’s return, the first beats for the well-known queen hit “Another One Bites The Dust” were already rhythmically playing. Westlife started this year’s hit medley with it. In jeans and black leather jackets, the four Irish rocked to the legendary songs by Fredy Mercury. This included “Radio Gaga”, “I Want to Break Free” and my favorite “Somebody To Love”. In “Don’t stop me now”, the band’s rocker, Kian, took his red guitar and grabbed the strings himself. And how impressive it is when 80,000 people clap and sing along to “We Will Rock You”. Fog fountains shot into the air at the end of the song. Back on the B-Stage, Westlife ended the Queen Medley with the well-known “We Are The Champions”. Compared to previous medley’s, this was somehow not my favorite. But it was fun. 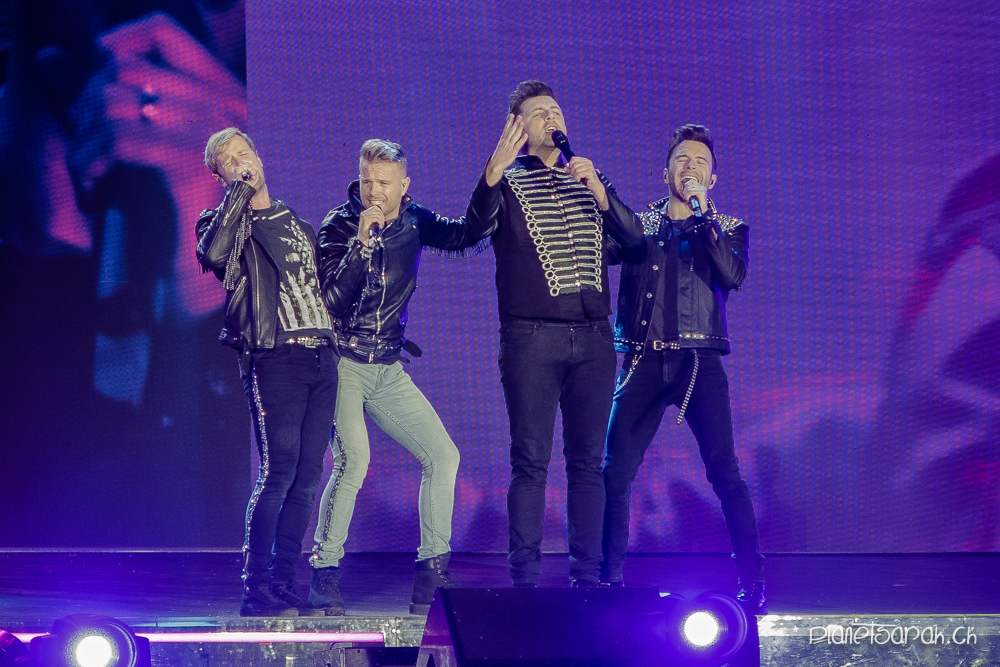 Our Love Is Unbreakable

Westlife changed again. In the meantime, short statements about the Westlife break-up flickered over the screens. With the huge moon in the background, the four singers in jeans outfits returned to the main stage for a short piece of the Abba cover “We Have A Dream”. They also conjured up the “infamous” stools and sat down at the front of the B-Stage for a reduced acoustic set. They started with “Unbreakable”. “Our love is unbreakable, it’s unmistakable” – Westlife received just as much love from the audience as before the break up. Of course Mark, Shane, Nicky and Kian also took some time to sing along and have fun with the fans. The beautiful set also included their hits “Fool Again”, “Queen Of My Heart” (no, Nicky would not shave his hair today like back then in the video) and “What Makes A Man”, and as the night fell the stadium lit up in more cell phone lights, flashing flower wreaths, glowing bracelets and light sticks. Would have loved to stop time! 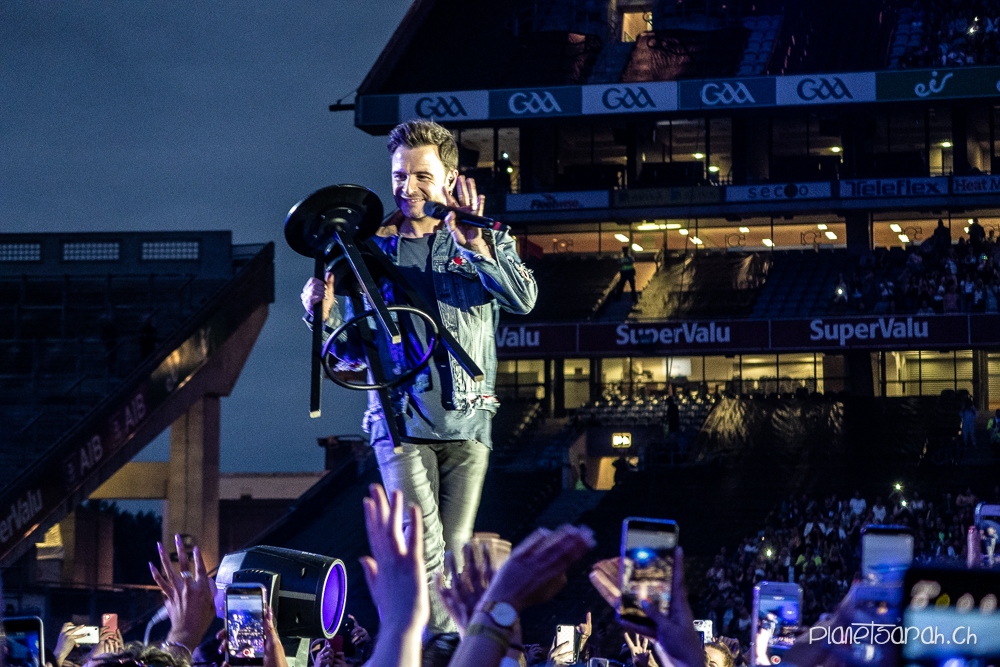 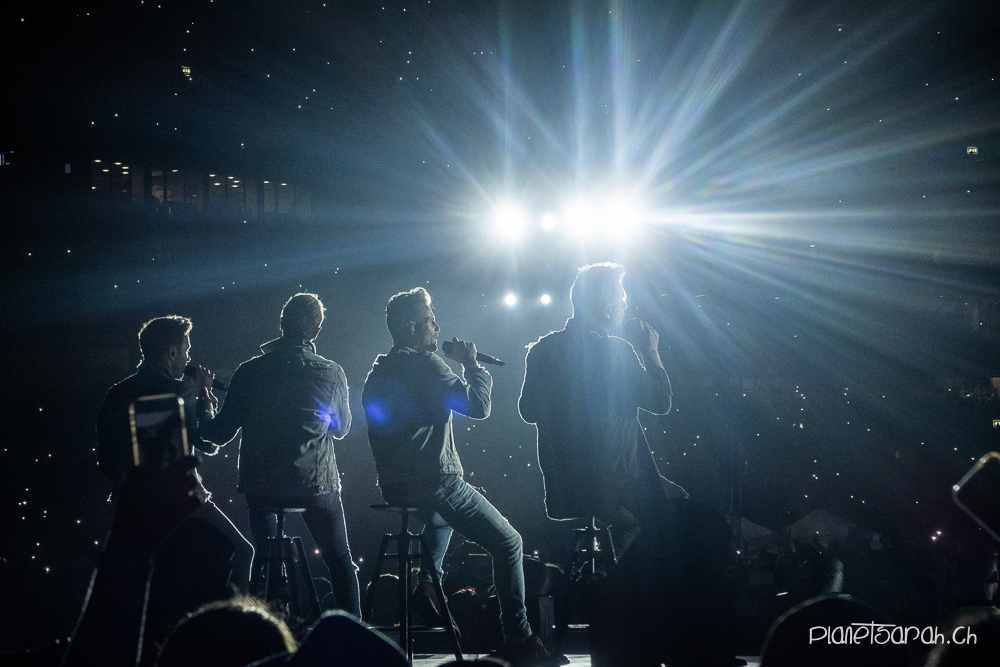 Our small World Of Our Own

With “Dynamite”, what I had not liked very much before, and a firework display above our heads, the show was already approaching the end. For “You Raise Me Up”, the stadium properly shone in a sea of lights, before the four dressed up for the encore. In white suits, Westlife let their fans wallow again with “Flying Without Wings”. The show ended in real boy group manner, with a dance choreography and sparkling fireworks for “World Of Our Own”. 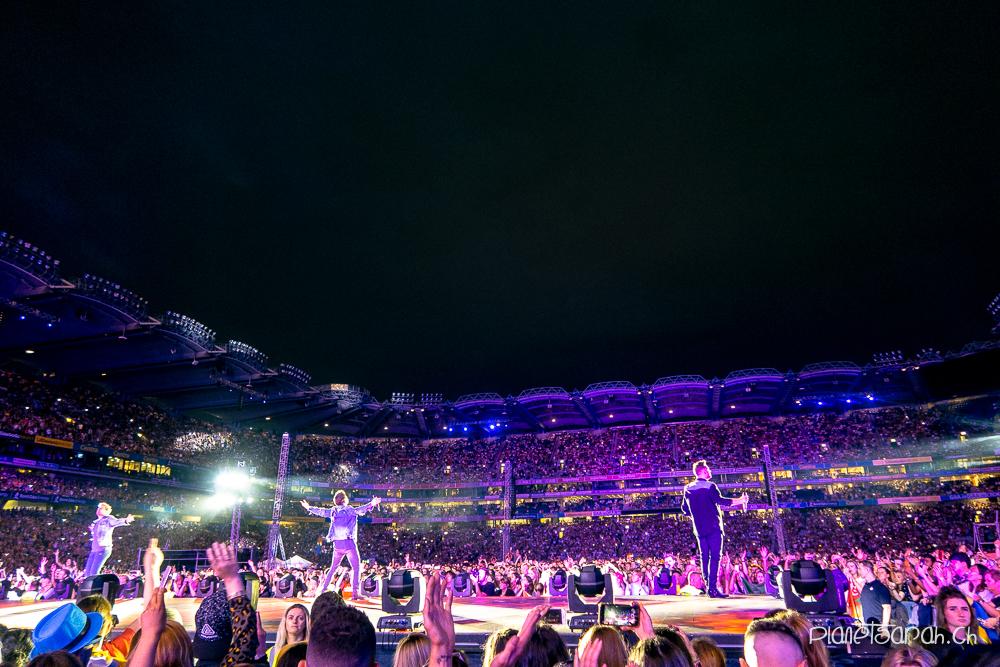 Yes, for about two hours the four Irish had brought us back to our own little Westlife world, carried us away and enchanted us. We looked forward to the second evening from the first show. After the second concert we left the stadium a bit moody, not knowing exactly when we will see our favorite boy group again. All in all, however, we were overjoyed with Westlife’s return and totally “high” from this mega-spectacle.

Have a look at the complete photo gallery here : Photo gallery: Westlife at Croke Park 2019

Info about the bands can be found here:

What did you dance with into May? Friday is #newmusicfriday day – my favorite day. Of course, new songs were released once again during the week and those who have the choice are spoiled for choice. There were a few more candidates for my Top5. The Top3 was immediately established;) So here are my five favorite releases of the week. What made it into your playlist? […]

Westlife celebrated their comeback with “The Twenty Tour” and the huge finale home in Ireland at Croke Park. […]

James Arthur hast been rocking the Stars Of Sounds Bühne in Aarberg. Please follow and like us: